Shares of InterCloud Syst (ICLD) have spiked up over 30% this morning on news of a product announcement.  The company has launched of a new cloud based Network Platform called NFVgrid. On Friday shares surged up over 50% after an announcement by the company that it’s new business backlog is now over $36 million.  They noted the backlog of new business is primarily fortune 100 companies.   On Friday the stock traded over 15 million shares.  The average daily volume over the last 3 months is just 419,000 shares.  The outstanding float for the stock is 14.4 million with a market cap of $51.92 million. As of 1pm in New York on Monday, ICLD had already traded over 20 million shares.  The float rotation, a stock trading it’s entire float, is common among low float stocks with breaking news.  Shares have traded within a 16% range today.  At the open shares spiked to a high of 3.52 before pulling back to support around 3.00.  As of 1pm in New York, shares were back up at daily highs of 3.50.

“The biggest motivation driving service providers and cloud providers to pursue NFV is the ability to quickly deploy services for new revenue opportunities. The virtualization is a reality and its going to change business models.” – Aqeel Asim, Vice President of InterCloud Syst

The price action of InterCloud Syst (ICLD) represented a common pattern among stocks experiencing strong volume.  There was a massive spike of volume a the open with over 4 million shares traded in the first 10minutes.  After the volatility of the first 10 minutes volume decreased and began to stabilize.  The common pattern is heavy volume at the open, fading volume moving into lunch, and then a slight increase in the afternoon.  Due to increased volatility at the open, many professional traders focus on the first 10 minutes as opportunities for big profit potential.  Beginner traders tend to avoid the opening 15minutes to prevent getting caught in the volatility which can result in substantial losses. 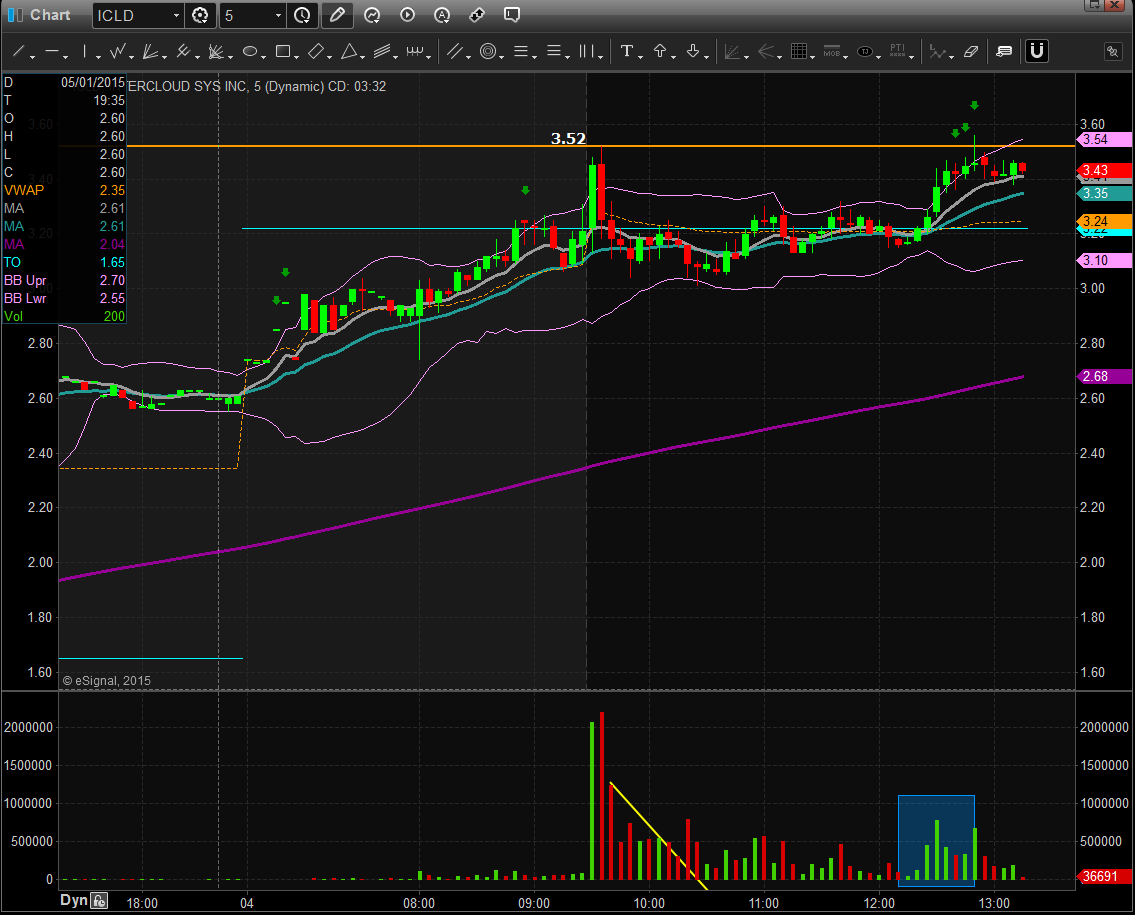 On Twitter and Stocktwits InterCloud Syst (ICLD) was among the top trending stocks for day traders and short term investors.  The 2 day run from a low of $1.61 to a high of 3.56 represents a 100% gain.  In a top heavy market some of the largest returns are found on small cap and low float stocks reporting earnings and news.  ICLD is no exception.

InterCloud Syst (ICLD), is a technology company that provides cloud solutions, telecommunications services, and IT network services.  The company states: “Our operations experience has given us a deep and comprehensive understanding of the markets we serve, as well as the ability to effectively manage people, projects and equipment.” Corporate headquarters are in Shrewbury, New Jersey.