“This is a tremendous achievement for the Company and the result of many years of hard work from our team. This clearance represents a unique opportunity for EDAP and its superior HIFU technology to penetrate the largest prostate market in the world in the same way it has emerged as the leading HIFU technology in Europe. With an established US sales and services infrastructure, the pieces are in place to begin deploying Ablatherm devices in the U.S. very quickly and we look forward to bringing the technology to urologists as well as patients in need.”   Globe Newswire 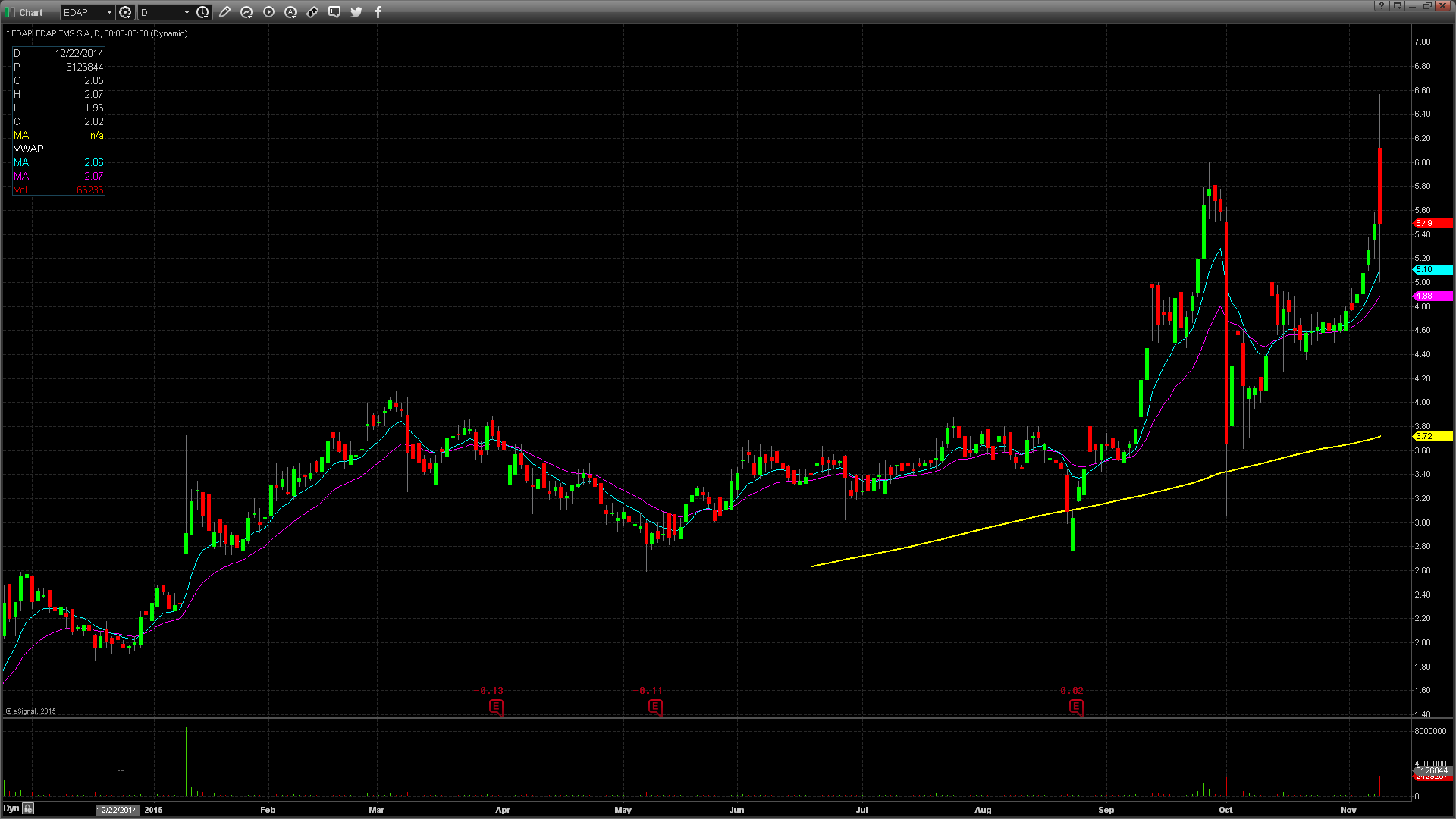 EDAP gapped up in price yesterday to $6.11, up from the prior day’s close of $5.49, which is a 10% increase on the favorable news. Taking a look at the daily chart, we can see the last time EDAP traded above this price level was all the way back on  December 27th 2010, when it traded at highs of $6.22. EDAP has gapped up above the previous 52 week high price of $6.00 reached on September 28th. Most stocks will pop when breaking through 52 week highs, so I will be looking to go long at the bell to try and catch the pop. EDAP has a low float of 24.91 million shares and is trading over 6 times the normal daily trading volume. EDAP did reach pre market highs of $7.00, but gave back $0.89 at the open, or equivalent to 13%. For trading purposes, my entry point would have been $6.20 looking for a run through $6.50. My stop loss would have been $6.00, fearing anything below that and the stock would start to fill in the gap up.

EDAP TMS S.A., together with its subsidiaries, develops, produces, markets, distributes, and maintains a portfolio of minimally invasive medical devices for the treatment of urological diseases worldwide. The company operates in two divisions: High Intensity Focused Ultrasound (HIFU), and Urology Devices and Services (UDS). The HIFU division develops, manufactures, and markets devices for the minimally invasive destruction of various types of localized tumors using HIFU technology. It also offers Ablatherm, a HIFU device for the treatment of organ-confined prostate cancer, referred to as T1-T2 stage; and Focal One device, a HIFU robotic device for the focal therapy of localized prostate cancer. In addition, this division leases equipment; sells disposables and spare parts; and offers maintenance services. The UDS division develops, markets, manufactures, and services medical devices for the minimally invasive diagnosis or treatment of urological disorders, primarily urinary stones and other clinical indications. It also offers lithotripters, such as Sonolith i-move and Sonolith i-sys for the treatment of urinary tract stones by means of ESWL technology. In addition, this division engages in the leasing of lithotripters; sale of disposables and spare parts; and provision of maintenance services. The company markets and sells its products through its direct marketing and sales organization, as well as through third-party distributors and agents. Its customers include public and private hospitals, urology clinics, and research institutions. The company was founded in 1979 and is based in Vaulx-en-Velin, France.  Yahoo Finance