Yesterday the stock of Collegium Pharmaceutical soared to an all time high of $30.58 on news that a Massachusetts court issued a stay of litigation proceedings between the company and Purdue Pharma, regarding Collegium’s opioid painkiller, Xtampza ER. The court order stimulated rumors of settlement and investors chased the stock up 20%.

Xtampza ER is a slow release form of the often-abused painkiller Oxycodone and is specifically designed to prevent such abuse. Xtampza ER received FDA approval in November, but Collegium cannot sell the drug until the patent litigation is resolved. In March, Purdue, the dominant supplier of Oxycodone filed a patent infringement lawsuit against Collegium. The Massachusetts court order stays all legal proceedings until after a scheduled settlement meeting between COLL and Perdue on February 25, 2016. A similar lawsuit between Purdue and Teva Pharmaceuticals was recently deemed invalid by a New York court.

Opioid painkillers have long been controversial as they are the most effective treatment for chronic, severe pain, but they also carry a relatively high incidence of abuse and addiction. The National Institute of Health estimates that of the 9.4 million Americans taking opioids for long-term pain, 2.1 million are addicted. Pharmaceutical companies have attempted to address this by introducing so-called, addiction-deterring opioid painkillers, but they have proven ineffective at stopping abuse. Xtampza ER’s patented DETERx slow release formulation effectively negates the common methods of prescription opioid abuse. The tailwinds pushing Xtampza are numerous and Collegium is positioned for explosive growth. The opioid painkiller market will continue to expand worldwide with the U.S. market alone currently valued at $11 billion annually. There will continue to be immense social, legal and political pressures to provide abuse-deterring solutions. NIH 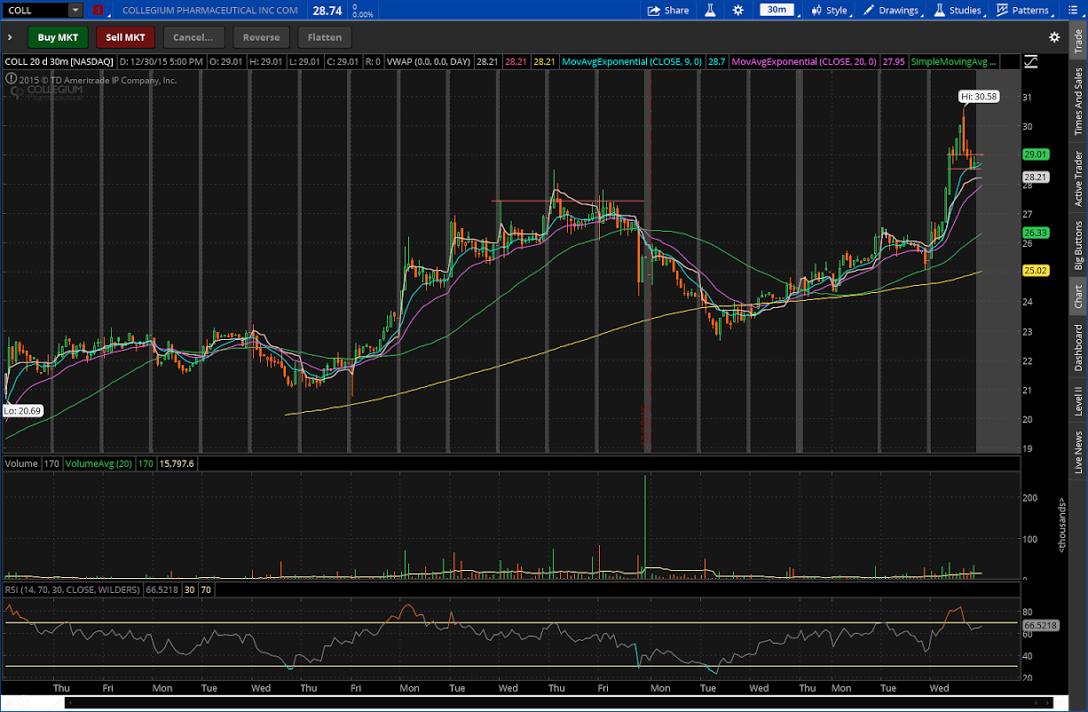 COLL is one of most successful IPOs of 2015, opening in May at $12 and positioned to close the year up more than 139% if Wednesday’s closing price holds. While the price action was impressive, year-end, holiday volume was as expected. The stock is in new territory and needs a few days of price discovery. There are plenty of potential catalysts over the next few months. In the near term, if buyers continue to chase there could be resistance near $29, $29.50, $30 and the all-time high at $30.58. If the sellers take control, the first level of support sits at previous ATH of $28.50. Below that support levels are near $28 $27.40 and $27.