Our core Animal Health segment reported 7% revenue growth for the fourth quarter. Adjusted EBITDA growth of 4% was below recent trends due to product mix and manufacturing costs related to production interruptions,” commented Jack Bendheim, Phibro’s Chairman, President and Chief Executive Officer. “Some of our U.S. customers continue to reduce usage of antibacterials that are classified as medically important by the Food and Drug Administration, in anticipation of upcoming regulatory changes and in response to consumer preferences for the reduction or elimination of antibacterials in protein production. While U.S. MFAs and other declined in the quarter, our international volumes grew. We believe international volume increases will continue to be a substantial offset to potential U.S. declines. Nutritional specialties and vaccines reported good growth as producers look for alternatives to maintain the health of their animals.  Globe Newswire 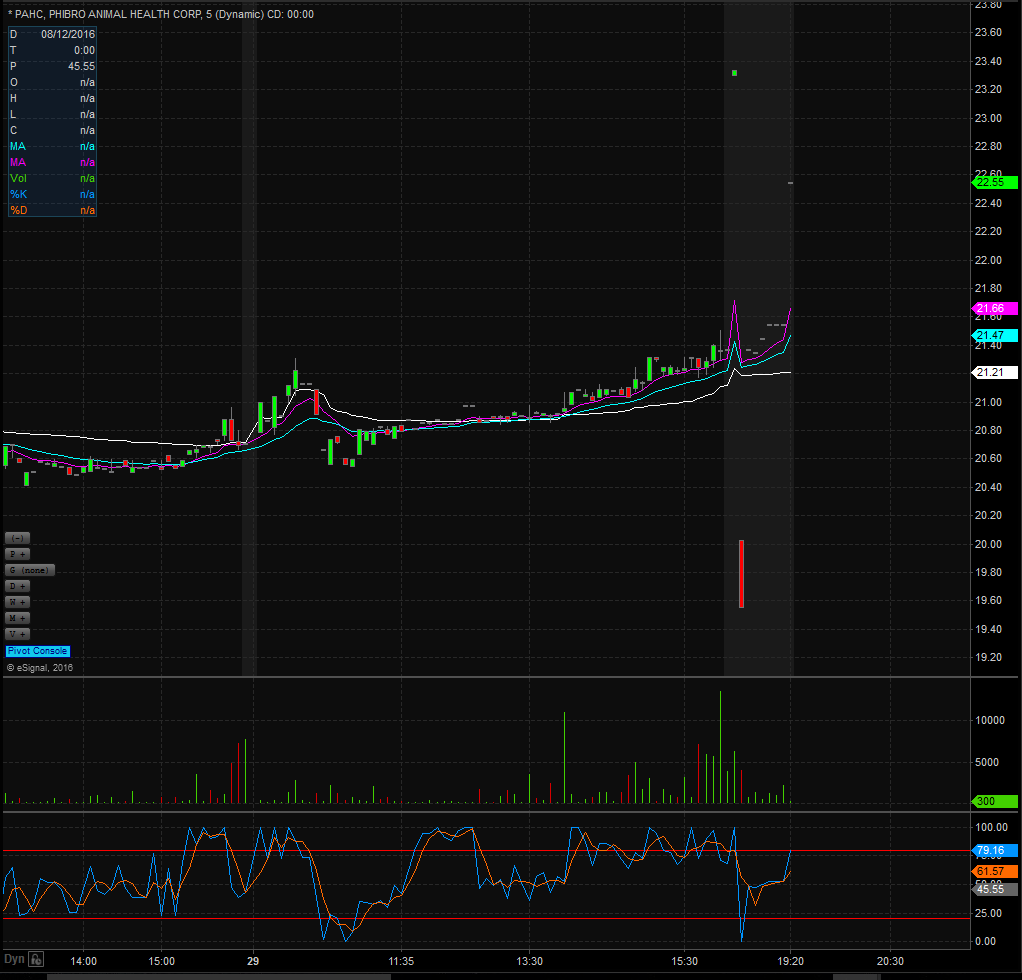 PAHC opened trading yesterday at $20.78 which was up from the previous days trading of $20.71. PAHC closed trading yesterday at $21.37 equivalent to a 3% increase from the opening price. Taking a look at the daily chart we can see the last time PAHC traded above these levels we have to go back to July 27th when it traded at highs of $21.37. Taking a closer look at the daily chart we can see that PAHC has been in an upward trend dating back to June 27th when it traded at $18.13. PAHC has a float of 18.44 million shares and traded below the normal daily trading volume on Monday. For trading purposes, I would like to see PAHC open trading on Tuesday above $21.15 and if it does I would be looking to take a long position at the bell. My stop loss would be $0.15 from my entry position fearing anything more than that and the stock would start to fill in the gap up.

Phibro Animal Health Corporation operates as a diversified animal health and mineral nutrition company in the United States, Israel, Latin America, Canada, Europe, Africa, and the Asia Pacific. It operates through three segments: Animal Health, Mineral Nutrition, and Performance Products. The company develops, manufactures, and markets animal health products for a range of food animals, including poultry, swine, beef and dairy cattle, and aquaculture. Its animal health products include antibacterials that are biological or chemical products used in the animal health industry to treat or to prevent diseases; anticoccidials to prevent and control the disease coccidiosis in poultry and cattle; anthelmintics for treating infestations of parasitic intestinal worms; anti-bloat treatment products used in cattle to control bloat in animals grazing on legume, or wheat-pasture; and medicated feed additives and other related products. The companys animal health products also comprise nutritional specialty products, which enhance nutrition to help improve health and performance; and vaccines to prevent diseases primarily in the poultry and swine industries. In addition, it manufactures and markets approximately formulations and concentrations of trace minerals, such as zinc, manganese, copper, iron, and other compounds. The company sells its animal health and mineral nutrition products directly to integrated poultry, swine, and cattle integrators, as well as through commercial animal feed manufacturers, wholesalers, and distributors. Further, it manufactures and markets a range of specialty ingredients for use in the personal care, automotive, industrial chemical, and chemical catalyst industries through its local sales offices. The company was formerly known as Philipp Brothers Chemicals, Inc. and changed its name to Phibro Animal Health Corporation in July 2003. Phibro Animal Health Corporation is headquartered in Teaneck, New Jersey.  Yahoo Finance