The Trade Desk reported second quarter earnings of $18.8 million and earnings of $0.53 per share. Thier  revenues came in at $72.8 million.

“The programmatic revolution continued to gain momentum and our success was driven by our commitment to be an objective, independent, data-driven software platform for our customers to unleash the power of programmatic advertising through all channels and devices that touch the consumer,” said Jeff Green, founder and CEO of The Trade Desk. “A great start in the first half of the year points to a strong 2017 for our business. We’ve broken our previous revenue record and surpassed our own expectations during the second quarter with revenue of $72.8 million, which is a 54% increase year over year and we generated $10.7 million in cash from operations. During the quarter, our momentum continued with strong customer wins, international growth was robust again, mobile continued to lead our growth, along with strong results in native and audio. We also are excited to have opened our newest office in Shanghai.”   Globe Newswire 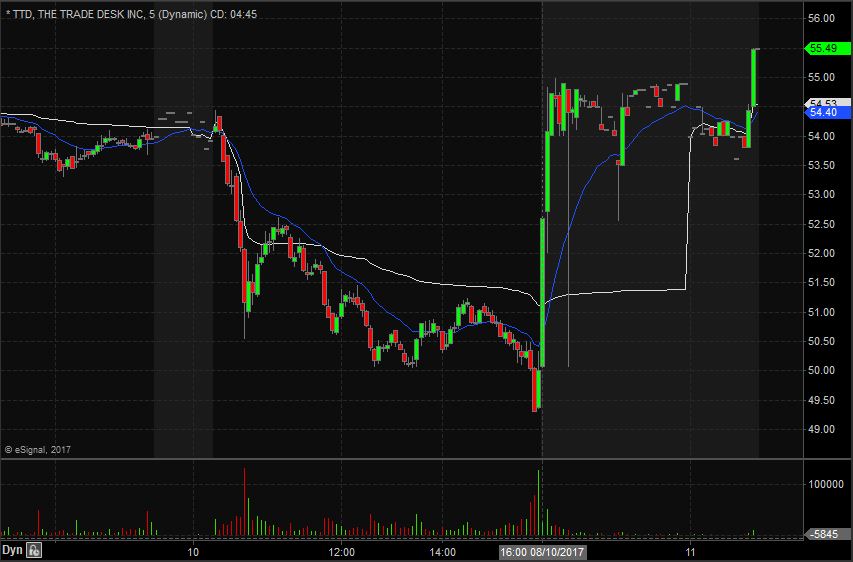 TTD opened trading yesterday at $54.07 which was up from the previous day’s trading close of $53.99. TTD closed trading yesterday at $50.06 and spiked up after market to $54.89, equivalent to a 10% increase from the closing price. Taking a look at the daily chart we can see the last time TTD traded above these levels we have to go back to August 7th when it traded at $55.51.

Taking a closer look at the daily chart we can see that before the spike up TTD had already been in an overall upward trend dating back to May 11th when it traded at $39.89. TTD has a float of 24.22 million shares and traded 1.73 times the normal daily trading volume on Thursday.

For trading purposes, I would like to see TTD open trading on Friday above $53.25 and if it does I would be looking to take a long position at the bell. My stop loss would be $0.30 from my entry position fearing anything more than that and the stock would start to fill in the gap up.

The Trade Desk, Inc., a technology company, operates a self-service cloud-based platform that enables advertising buyers to create, manage, and optimize data-driven digital advertising campaigns using their own teams in the United States and internationally.

Its platform allows clients to manage integrated advertising campaigns across various advertising formats, including display, video, audio, native, and social, as well as on various devices, such as computers, mobile devices, and connected television.

The company serves advertising agencies and other service providers for advertisers. The Trade Desk, Inc. was founded in 2009 and is headquartered in Ventura, California.  Yahoo Finance