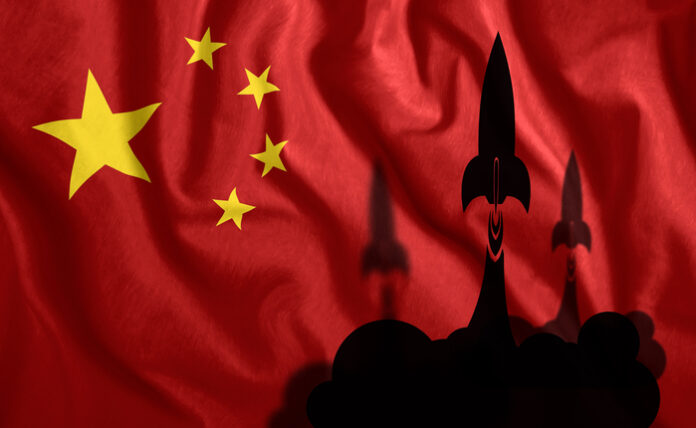 To the long litany of grievances by U.S. China hawks and other Middle Kingdom haters, add the practice of scattering unwanted space debris on random areas of the earth.

Steve Dent at Engadget reports the first stage of China’s Long March rocket is set to descend on the earth on Mother’s Day, and nobody knows where it will land.

Dent points out that New York Times has reported “chances of hitting a populated area are not zero.”

A map of the possible fallout zone shows a wide latitudinal band from New York City to Chile, encircling the entire globe, giving us a rather vague notion of where any parts of the 23-ton rocket element not burned up in reentry will land.

Although any individual person has a pretty low chance of being hit by a piece of the Long March rocket, the news in its entirety is pretty frightening from a certain perspective.

U.S. citizens will get a bit of a heads up from the 18th Space Control Squadron, a research outpost at Vandenberg AFB near Lompoc, California that is tracking the rocket daily.

It’s interesting to wonder, though, about these practices from a liability perspective – as Dent’s story points out, it is possible to guide space materials in reentry, begging the question: why don’t the Chinese control their rockets? And: is this kind of like picking up your dog’s doo-doo – or, given the potential for damages, something much more important?

Just for fun, let’s see what the reaction is over at reddit’s r/r collapse, a “free speech and thought zone about the collapse of global industrial civilisation that’s slightly less Kafkaesque than r/collapse.”

The lone post contains a joke comment tying the news back to China’s purported responsibility for the conditions generating the global pandemic.

“They say the rocket likely emerged from bats or a live animal ‘wet market’,” writes IceGoingSouth, on a thread with a news video titled: Falling China Rocket Poses Debris Threat.

All jokes aside – watch those skies. Also, for investors, the takeaway might be that it’s important to always think about the fallout from used hardware as you also ponder other headier concepts around product development, etc.