ZIOP has been on fire in the past few months capturing traders’ attention as it begins to trend and the volume steadily increases. ZIOP current short interest stands at nearly 30 million shares, or roughly 34% of the float.

In recent news, the company’s Executive Vice President, Caesar J Belbel has also taken responsibility of Chief Operating officer and ZIOP’s CEO had the following comments. Caesar has been an integral part of the ZIOPHARM senior management team through the Company’s evolution into a leading developer of next generation immuno-oncology therapeutics. He has the experience and expertise, developed over a 30 year career in advising and building emerging companies, to help ZIOPHARM prosper in its next phase of development. We expect that his leadership, corporate development and transactional experience will continue to add important value to the Company as he takes on the responsibilities of this new role.”

IMPEDE is a technology which disrupts the ability to extract pseudoephedrine from many non prescription cold and sinus medicine used to create the illicit drug methamphetamine, an addictive drug abused by millions of individuals.

Acura Pharmaceuticals, Inc. is a specialty pharmaceutical company developing and commercializing tamper-resistant products to combat medication abuse and misuse. For nearly a decade, Acura has been on the forefront of developing solutions to combat this epidemic, with products utilizing the Company’s proprietary abuse deterrent AVERSION® and IMPEDE® Technologies. www.acurapharm.com

ANTH announced news that it has reached the target for its enrollment of its CHABLIS-SC1 for the treatment of Lupus.

ANTH Chief Medical Officer noted, “Reaching our enrollment target for CHABLIS-SC1 ahead of schedule is an important accomplishment. The accelerated pace speaks to the importance of patient identification and selection in lupus treatment. In addition, the wealth of new information released over the past year regarding the treatment of Systemic Lupus Erythematosus (SLE) and BAFF inhibition has demonstrated that patients with more severe disease, such as those enrolled in the CHABLIS-SC1 trial, are more likely to respond to a BAFF therapy. We look forward to the culmination of our efforts in CHABLIS-SC1 next year as we continue the development of blisibimod.”

The results of the trial are expected sometime in the second half of 2016.

ANTH has experienced a strong surge higher in the past few weeks, tacking on over 100% to its share price as the positive news continues to be released. Can the strong trend continue? Keep ANTH on your watch list as the outlook for the company remains bright. 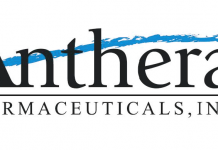