Prima BioMed Ltd. (PBMD), a biotechnology company striving to become the leader in the development of immunotherapeutic products for treatments of various cancers, received an outperform rating from FBR Capital. The price target was set at $6.

“We are initiating coverage of Prima BioMed Ltd. (PBMD) with an Outperform rating and a price target of $6 per share. Whereas PBMD had one active clinical program in 2014, the company now has three novel product candidates in active clinical development, including IMP321, IMP731, and GSK 2831781, with the latter two rapidly being advanced by two partners committed to their full evaluation. We believe the current valuation of Prima BioMed is disconnected from our estimation of the significant value PBMD has created in advancing its clinical-stage product pipeline.”  Street Insider 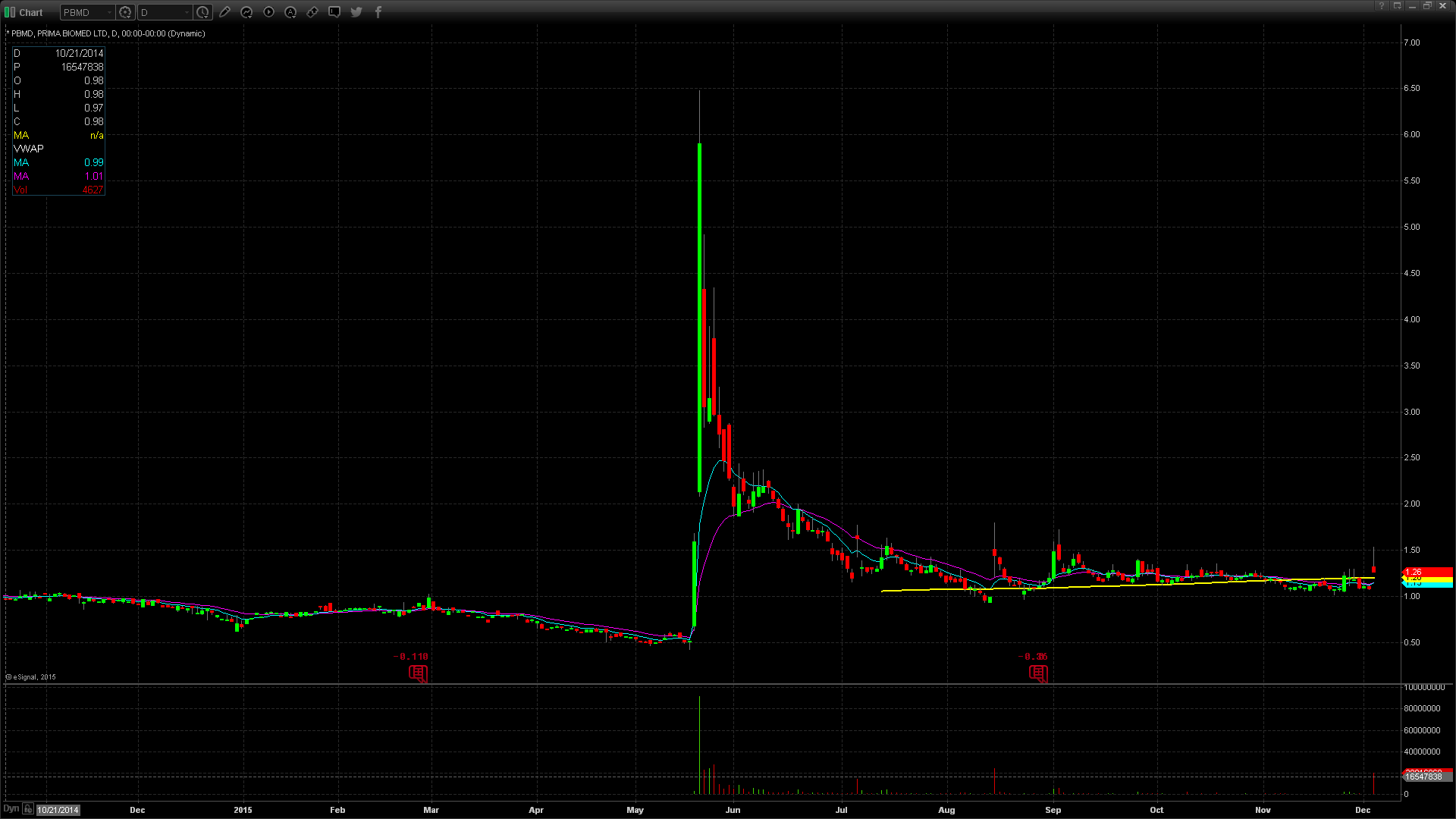 PBMD gapped up in price yesterday to $1.30, up from the prior day’s close of $1.08, which is a 20% increase on the favorable news. Taking a look at the daily chart, we can see the last time PBMD traded at this price level was on November 24th, when it traded at highs of $1.31. Taking a further look back on the daily chart, we can see that PBMD had a huge spike up in the middle of May. PBMD was trading at $0.52 on May 18th and jumped all the way to highs of $6.48 on May 20th; an 1,146% increase in price. More recently, in the past couple of months, PBMD has been in a trading range in between $1 and $1.50. With this spike up I would expect PBMD to test the top of that range. PBMD does have a  float of 62.25 million shares and was trading 16 times the normal daily trading volume. PBMD did reach pre market highs of $1.42, but gave back $0.12 at the open, or equivalent to 8%. For trading purposes, my entry point would have been $1.35 looking for a run to $1.50. My stop loss would have been $1.25, fearing anything below that and the stock would start to fill in the gap up.

Prima BioMed Limited is an Australia-based biotechnology company. The Company is engaged in research, development and commercialization of licensed medical biotechnology. The Company focuses on cancer immunotherapy research. The Company’s main pipeline of products is based on the LAG-3 immune control mechanism, which plays a role in the regulation of the T cell immune response. The Company’s product is a T cell immunostimulatory factor (APC activator), IMP321, for cancer chemoimmunotherapy, which has completed Phase II trials. In addition, it has developed infrastructure for a cell-based therapy manufacturing platform and taken CVac, an autologous dendritic cell-based product through Phase II clinical trials for ovarian cancer patients in remission. The Company’s other products include IMP731 for autoimmune disease, and IMP701 for cancer and chronic infectious disease.  Reuters