Shares of Ulta Beauty, Inc., topped Friday’s session after rising by 7.6% or $15.74 to trade at $221.87. The fourth-quarter earnings were not so good, but the shares managed to climb later in the day after the company announced its new share repurchase program worth $625 million in a conference call. Updates about the beauty products seller areas of strength during the period also helped its shares surge during midday trading.

The stock also received some positive feedback from analysts, including being included in the Jefferies’ Franchise Pick List. The stock was also given an ‘Outperform’ rating by Wells Fargo’s Ike Boruchow, writing that company’s more realistic expectations and strong growth made its shares look compelling. 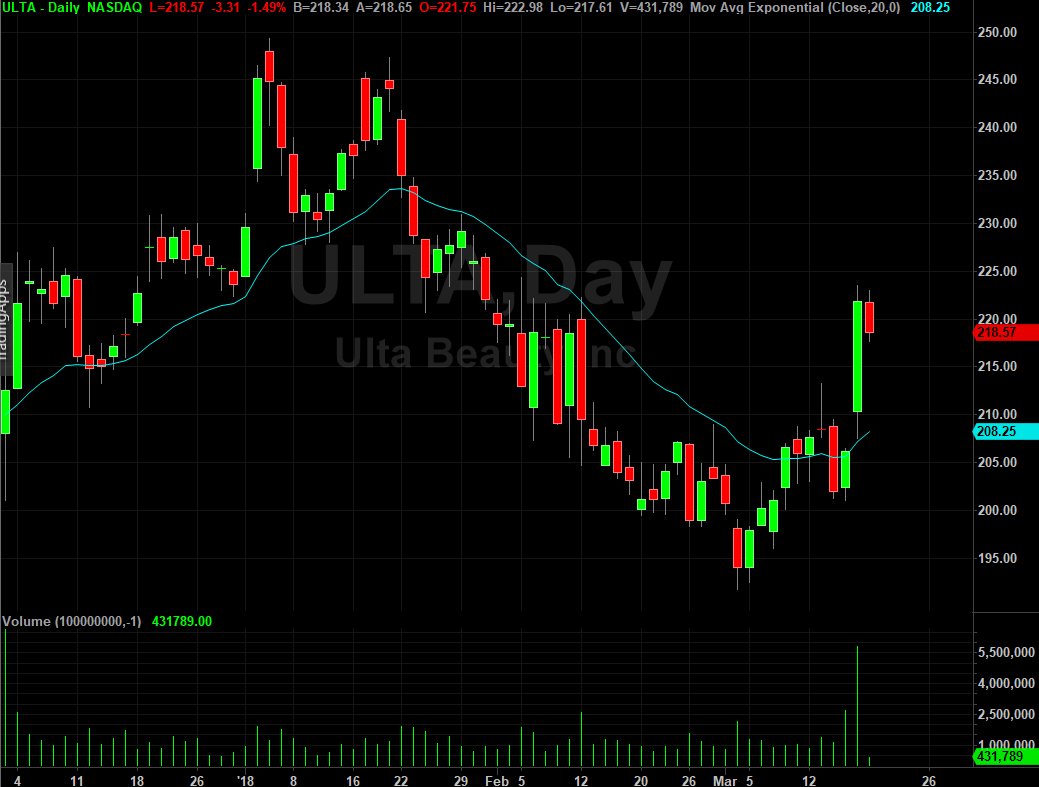 In its Q4 earnings report, the company said it missed its earnings per share (EPS) consensus by $0.03 after posting $2.75 a share, on $1.94 billion revenue, which matched the expectations of Wall Street.

The company’s gross profit margin dropped to 34% from 34.5% in the prior-period, while e-commerce accounted for 60% of the retailer’s overall sales. Operating margin shrunk to 13% from 14.2% in the same period last year due to increased expenses that rose quickly than sales.

The company’s Chief Executive Officer Mary Dillon said that the company “achieved strong earnings and sales growth in the fourth-quarter” while continuing to make essential progress on its imperative strategies and gaining more market share. She, however, reported that “the core makeup segment of the company slackened significantly during the Q4, but that the slowdown did not affect the year’s solid growth.” Dillion concluded by saying that her team delivered outstanding results for the fiscal year 2017 by achieving an adjusted earnings growth of 25% and a comparable sales growth of 11%.

Headquartered in Bolingbrook, Illinois and founded in 1990, Ulta Beauty, Inc. is one of the largest retailers of beauty products in the world. The company’s store offers skincare, cosmetics, haircare, fragrance, body and bath products, and nail accessories and products, as well as salon styling accessories. It also has a website (ulta.com) that offers over 20,000 products from around 500 beauty brands, including the company’s own private label, known as the Ulta Beauty Collection.

Previously the company went by the name Ulta Salon, Cosmetics & Fragrance, Inc. which it later changed to its current name at the beginning of last year. Aside from its website, the company operates around 970 stores in the District of Columbia and in over 48 American states. In addition, each of its stores has a full-service salon that offers skin, brow and hair services. –Bloomberg