II-VI Incorporated shares surged 8% on Tuesday to close trading at $41.35 following the announcement of its third-quarter earnings report. The laser company reported better results on overall as volume of sales had increased significantly to finish above Wall Street’s expectations.

Adjusted EPS also went up but slightly missed the consensus analyst estimate. The company expects to take advantage of the demand of laser products in the industry to generate stronger earnings and revenue. 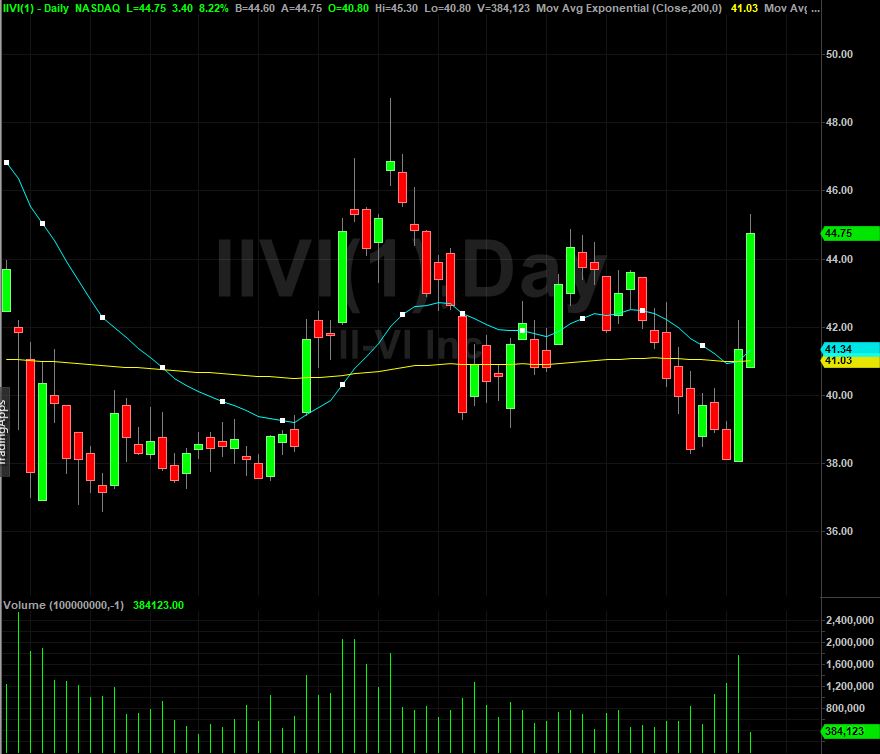 II-VI incorporated revenue increased by 20% to 294.7 million from 245.0 million in the year ago period. In addition to the increase, the revenue surpassed the consensus estimate of 278.1 million. Adjusted earnings were $0.36 per share and fell short slightly of Wall Street projection by two cents.

Earnings per share during the quarter had increased by one percent compared to the same period last year. The company projects to post revenue in the range of $295 million to $305 million in the fourth quarter. The projected earnings per share for the last quarter is between $0.37 to $0.43 per share.

The President and Chief Executive Officer, Dr. Vincent D. (Chuck) Mattera, Jr. made the following comments on the company’s performance: “Our third quarter was marked by strong bookings, revenue and earnings from our core markets of industrial, communications and military with solid contributions from our newer growth markets. Our CO2 laser optics and EUV (extreme ultraviolet) lithography components businesses had another record quarter, and our optical communications business had 36% sequential growth in bookings.  Silicon carbide substrates shipments grew 60% over the same quarter last year, 24% sequentially. For 3D sensing, we are excited about our positioning and we continue to see our market opportunities growing.  Overall, with our consolidated book to bill ratio at 1.13 and our record backlog of $442 million, we expect our fourth quarter to be a good finish to the year.”

The company produces numerous application-specific photonic and electronic materials and components, which it deploys in several forms, including integrated with advanced software.

II-VI has manufacturing, research and development, sales, service, and distribution facilities globally. II-VI Incorporated was founded in 1971 and is based in Saxonburg, Pennsylvania. Its competitors include Ophir Optronics, Raytheon Corporation, Rohm and Haas Company, Northrop Grumman Corporation, and Sumitomo Corp. –Reuters