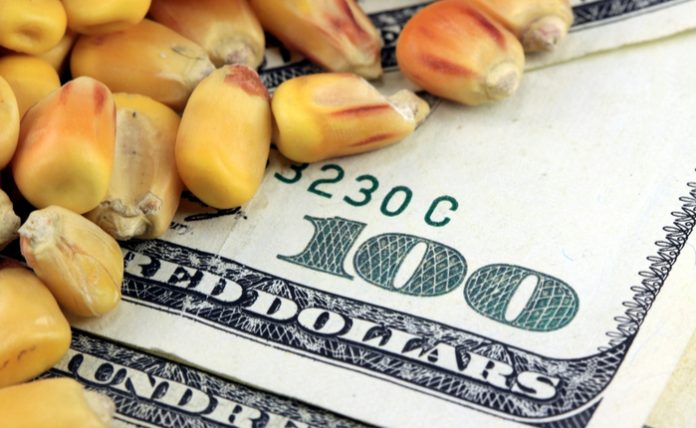 U.S. farmers are severely behind in their corn planting season to the tune of millions of acres thanks to record flooding in the Midwest.

With it becoming clear that there’s no way for farmers to catch up, futures markets are expecting this upcoming crop to be one of the smallest in history. As such, corn futures are approaching 5-year highs as the crisis continues.

According to data released by the U.S. Department of Agriculture, corn planted in the 18 states that account for the majority of U.S. production was at 83 percent complete as of June 9th, far below the 99% completion rate seen by the same time last year.

Corn futures settled at $4.30, the highest price seen so far in June and is already 15 percent higher than the $3.75 price level seen back on December 31st, 2018. In a normal planting season, farms would have finished planted corn two weeks ago, but at this rate, still will likely spend up to a few more weeks planting.

“This is a very dire situation for the U.S. corn crop. It has never been this late or this challenging,” said Arlan Suderman, chief commodities economist at INTL FCStone Financial.

With merciless rains in the Midwest triggering flood conditions that lasted well into May, the U.S. has seen a record-slow planting pace for corn in particular, but also other crops such as soybeans. Most of this year’s crop “was planted in cool wet soils, which is not advantageous for yields,” added Suderman, potentially contributing to even tighter supplies as the upcoming crop will likely be of poor quality.

The DTN National Corn Index, which assembles more than 3,000 cash corn bids from across the nation, has already increased by 89 cents from the low point it hit in mid-May, already reaching a 5-year high.

In particular, the Great Lakes region, eastern South Dakota, and Illinois saw some of the largest price moves, while Iowa, Minnesota, North Dakota, Missouri and Kansas all saw smaller, but still significant, price moves in comparison to last month.

What’s even worse news for corn farmers in the Eastern Corn Belt is expected to see even more rain next week, between 2.25 and 3 inches during the next week.

Farmers have been tempted to give up the planting season altogether and accept insurance payouts instead. With already a significant number of corn farmers opting out altogether, the U.S. government has taken steps to help spur demand and give farmers some initiative to continue.

President Trump passed a law recently that would allow a higher blend of corn in their U.S petrol supplies, even though it would chip away at their renewable fuel goal plan.

Specifically, petrol containing up to 15 percent ethanol (E15) would now be permitted, as opposed to the regular 10 percent, a move would both the biofuel lobby as well as farmers across the country appreciated.