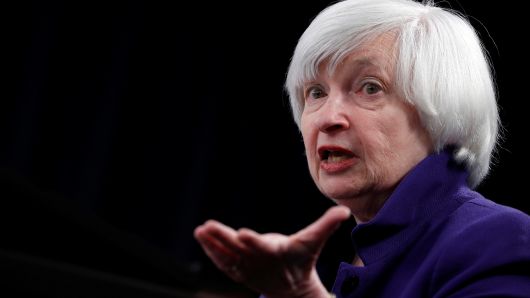 Markets poised for positive opening as earnings roll in

Meanwhile, Janet Yellen said in a CNBC interview Thursday that she believes the U.S. economy could see “several more months of rapid inflation” as it continues recovering from the effects of the Covid-19 pandemic.

“I think we will have several more months of rapid inflation,” the U.S. Treasury Secretary said. “So I’m not saying this is a one-month phenomenon, but I think over the medium term, we’ll see inflation decline back toward normal levels. But, of course, we have to keep a careful eye on it.”

Yellen also said that the economy could reach full employment next year, and added that the Federal Reserve is doing a good job under the leadership of Jerome Powell.

In his second day of testimony to Congress on monetary policy and the economy Thursday, Powell remained dovish but noted that there is “a shock going through the system associated with the reopening of the economy and it’s driven inflation well above 2%, and of course we’re not comfortable with that.”

On the economic data front, traders awaiting data on U.S. retail sales for June which is due at 8:30 a.m. ET. Economists expect the Commerce Department’s report to show retail sales rose slightly last month after slipping 1.3% in May.

Other key releases to watch today include the University of Michigan’s consumer sentiment index for July and business inventories for May. Both are scheduled for release at 10:00 a.m. ET.

In other news, a new report from the Wall Street Journal says chipmaker Intel (NASDAQ: INTC) is in talks to buy rival GlobalFoundries in a deal worth about $30 billion.

Sources familiar with the matter told the Journal that a deal is not guaranteed and GlobalFoundries could proceed with a planned initial public offering.

The acquisition, which would be the largest for Intel, could help boost its plans to make more chips for other tech companies.

GlobalFoundries is one of the biggest specialist semiconductor maker and is owned by an investment arm of the Abu Dhabi government that is based in the United States.