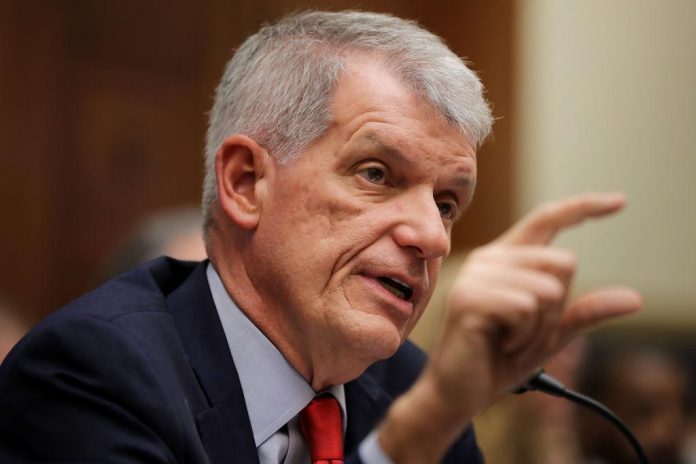 Wells Fargo Chief Executive Officer, Tim Sloan is stepping down after spending more than two years trying in vain to prove to regulators and lawmakers that the troubled banking giant no longer poses a threat to its shareholders and customers.

In a press statement, the bank on Thursday said that Sloan is giving up his roles as CEO, president and a member of its board of directors effective immediately. He will retire from the bank completely on June 30, 2019.


He is set to be replaced by Wells Fargo general counsel, C. Allen Parker, who will serve as interim CEO and president until the bank finds a permanent replacement. Sloan said in the press release: “It has become apparent to me that our ability to successfully move Wells Fargo forward from here will benefit from a new CEO and fresh perspectives.”

Sloan, 58, becomes the second Wells Fargo chief executive to leave the company in about two and a half years, as the banking giant has been buffeted by massive scandals. He took the top job in October 2016 from John Stumpf, who was forced to resign in the wake of the biggest mis-selling scandal in the history of American retail banking.

The Consumer Financial Protection Bureau ordered Wells Fargo to pay $185 million in fines and penalties that year for opening millions of bank accounts in order to fulfil its unrealistic revenue goals. Sloan was appointed to bring the bank back from the scandal, but the media repeatedly unearthed new improprieties.

Wells Fargo accidentally foreclosed on the homes of nearly 400 customers causing them to lose their homes. Tens of thousands of its car loan customers also had their cars repossessed after the bank tacked unnecessary auto insurance onto their accounts.

Wells Fargo now plans to look at external candidates for its next chief executive. Sloan served as CFO under Stumpf’s tenure and was an unpopular choice as CEO. Many experts felt that for the California-based bank to clean up its mess, it needed someone from outside.

Earlier this month, Wells Fargo increased Mr. Sloan’s pay by 5% to $18.4 million for his impressive work last year. However, he has been under immense pressure from regulators and politicians such as Sen. Elizabeth Warren since he took over from Stumpf. Mrs. Warren had repeatedly urged Sloan to resign, arguing that he was too associated with Wells Fargo to make positive changes.

The senator tweeted Thursday, “About damn time. Tim Sloan should have been fired a long time ago. By the way, getting fired shouldn’t be the end of the story for Tim Sloan. He shouldn’t get a golden parachute. He should be investigated… . And if he’s guilty of any crimes, he should be put in jail like anyone else.”

However, Sloan has been endorsed by one of the top investors in the world and the largest Wells Fargo shareholder – Warren Buffet. The billionaire investor told CNBC’s Becky Quick during an interview that he supports Sloan “100 percent.”