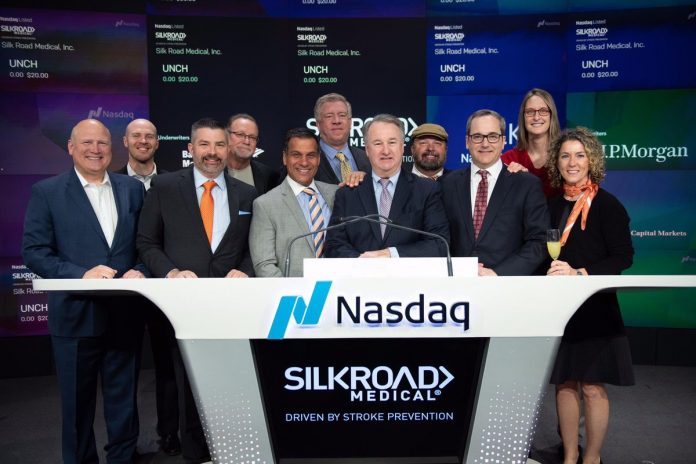 One of today’s biggest winners on the market as a small medical stock that few have heard about. Silk Road Medical went public today in its initial public offering as shares almost doubled over the course of a day.

The medical device company raised around $120 million in an IPO, selling 6 million shares at a target price of $20 per share. This was already an improvement from the original 4.7 million it intended to sell between $15 and $17 apiece. However, the company was surprised by the market’s reaction as shares surged well into the $33.15 per share range, putting the company’s market cap at around $1 billion.


Based out of California, Silk Road develops and manufacturers transcarotid medical devices for carotid artery disease. Their products provide easy, minimally-invasive access to veins and arteries in the body, helping reduce the risk of stroke resulting from the buildup of plaque.

“We are a medical device company focused on reducing the risk of stroke and its devastating impact. We believe a key to stroke prevention is minimally-invasive and technologically advanced intervention to safely and effectively treat carotid artery disease, one of the leading causes of stroke. We have pioneered a new approach for the treatment of carotid artery disease called transcarotid artery revascularization, or TCAR, which we seek to establish as the standard of care,” read the company’s S-1 Filing for those interested in the details.

“TCAR relies on two novel concepts – minimally-invasive direct carotid access in the neck and high-rate blood flow reversal during the procedure to protect the brain – and combines the benefits of innovative endovascular techniques with fundamental surgical principles. TCAR using our portfolio of products has been clinically demonstrated to reduce the upfront morbidity and mortality profile of current treatment alternatives while providing a reduction in long-term stroke risk. “We are the first and only company to obtain FDA approvals, secure specific Medicare reimbursement coverage, and commercialize products engineered and indicated for use in TCAR [transcarotid artery revascularization],” continued the filing.

It’s estimated that the U.S. market for this technology is quite strong with 427,000 patients annually diagnosed with carotid artery disease that requires medical stroke prevention treatments. Around one-third of strokes are caused by carotid artery disease, the primary cause of the condition with around 4.3 million diagnosed with blocked arteries in 2018. Overall, around $2.6 billion is spent on treating these patients’ conditions, a sizable market in which there are few competing players.

Silk Road was one of two Bay Area life science companies that went public today, with 5 having gone public so far this year. Renaissance Capital went on to predict that the sector has accounted for around 45 percent of all IPOs in the past 12 months. The other company that went public today was NGM Biopharmaceuticals (NASDAQ: NGM), which is focused on developing treatments for NASH and Type 2 Diabetes.

Unlike Silk Road, shares of NGM dropped around 9 percent, so there were factors other than IPO excitement that led to Silk Road’s jump in price. Overall, the company reported $34.6 million in revenue last year, up by 143 percent since 2017.