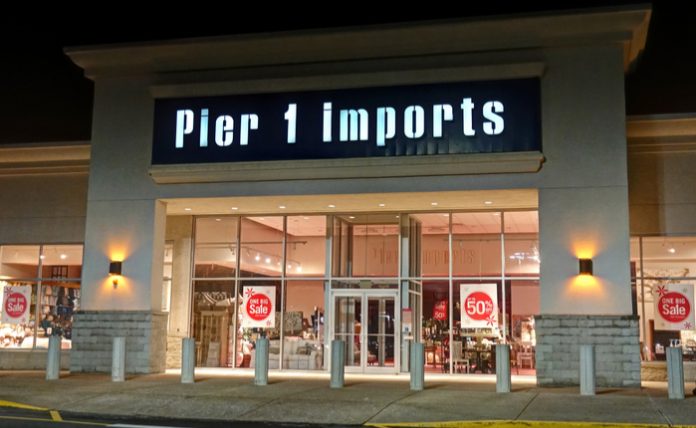 Retailers have been struggling over the past decade or so as the ongoing “retail apocalypse” continues. With physical, brick-and-mortar stores dying out in favor of online shopping and websites like Amazon, many retail-chains have struggled to stay in business.

Today, shares of home décor retailer Pier 1 Imports dropped 25 percent after announcing poor earnings, store closures, along with rumors of a possible liquidation according to analysts on Wall Street.


The company’s CEO, Cheryl Bachelder, tried her best to keep an optimistic tone despite the disappointing Q4 earnings report, but her comments did little to reassure investors and analysts in general.

“[O]ur analysis confirmed that our wounds were predominantly self-inflicted,” said Bachelder. “Decision-making around critical areas of the business was poor, and costs were not managed to match the performance. We also lost focus of our core customer. Over the past four months, our team has worked with a sense of urgency to get Pier 1 back on track. We’ve done a lot of consumer homework and aided by CRM [customer relationship management] analysis we found that our core customer is continuing to shop. She still loves Pier 1 and that means we have an opportunity to win her back.”

Overall, the company announced they had shut 30 stores in 2018 and will close up to 145 more in 2019. As of the end of fiscal 2019, the retail giant had 973 stores in total. In response to the news, a number of analysts shared their thoughts on the situation of Pier 1 Imports, all of them bearish.

“Given the trends in business, and its negative earnings per share, EBITDA [earnings before interest, tax, depreciation and amortization], and free cash flow, we see Pier 1 and its $1.6 billion in revenues as potentially at risk of needing liquidation if trends don’t improve,” wrote KeyBanc Capital Markets analysts led by Bradley Thomas.

“To its credit, the new leadership at Pier 1 appears to be working very hard to right its ship,” added Raymond James analysts led by Bobby Griffin. “But the problems are many and it’s not clear that the leadership has the time and pathway to the resources that will allow its plan to work.”

“While the company has embarked on a number of transformation and cost control initiatives, in our view its ability to turn around earnings to a level that supports a timely and economical refinancing of its term loan due 2021 remain highly uncertain,” wrote Raya Sokolyanska, vice president and senior analyst at Moody’s. “Nevertheless, over the next 12 months liquidity should be adequate mainly due to availability under the company’s $400 million asset-based revolver and a lack of maturities until the term loan due date.”

The situation surrounding Pier 1 Imports is growing increasingly common among retail chains. Those that fail to transition successfully to more online-shopping centric models will face a similar future that Pier 1 is now facing.

Pier 1 Imports Inc is a United-States-based retailer of decorative accessories, furniture, candles, homeware, gifts and seasonal products. The company operates through retail stores and an e-commerce website under the brand Pier 1 Imports. Most of the company’s stores are located in the U.S., followed with a few stores in Canada.

The company also provides products and licenses the Pier 1 Imports brand to Grupo Sanborns, which operates a number of stores in Mexico and El Salvador. The company sells merchandise produced in a number of countries, such as China, India, Vietnam, Indonesia, the U.S., and others. – Warrior Trading News

Ridesharing made a strong recovery in May, good news for Lyft and Uber

U.S. Economy could take 10 years to recover according to budget agency

Ridesharing made a strong recovery in May, good news for Lyft...