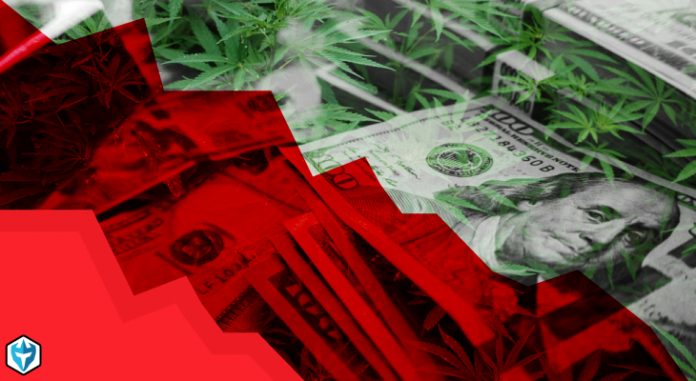 The marijuana sector is a growing industry that is continuing to increase as more firms become public in Canada and in the United States.

First, lets take a deeper look at why this popular industry is lagging so much.

Why marijuana stocks are performing so poorly

As the world’s most trafficked, used and cultivated illicit drug, and as the push for legalization abroad and at home grows, marijuana is gathering significant attention from researchers, manufacturers, and investors.

Though the cannabis industry has faced inhibition by regulatory restrictions in recent history, the legal market has developed swiftly as more authorities legalize recreational and medical use.

The market shows no sign of slowing down and industry experts project the global legal marijuana market to grow from its present value of $9.2 billion to an implausible $57 billion by 2027.

Although $10.9 billion in lawful sales were realized in worldwide licensed cannabis stores last year, it is evident that tens of billions of dollars in sales are happening in the black market.

As legalization occurs in more and more countries, it offers an opportunity for consumers to move from illicit to legal channels. However, cannabis stock profits projections are sinking, and their sales have declined recently on a sequential quarterly basis. The following cannabis stocks depict dipping forward-year earnings estimates based on a census held by Wall Street approximately months ago.

Cannabis growers in Canada have been faced by an array of supply-side issues nationally. For instance, the regulatory agency, Health Canada that oversees the rollout of legal marijuana started the year with more than 800 licensing applications to evaluate.

Over five-plus years, this agency had permitted licensing applications for approximately 200 companies. Unfortunately, most growers have been in the waiting list for more than one year for an approval to grow and sell cannabis.

A shortage of compliant packaging solutions also hinders the good performance of this drug. This yields to large quantities of unprocessed marijuana, further amounting to supply shortages in many provinces within Canada.

Though the United States has not experienced as many supply issues, taxation on marijuana has become a bigger problem. Whereas a 10% tax rate on marijuana is set in Canada, several recreationally legal states in America opt to get more vigilant with taxation to cushion their budgets. California, the world’s largest marijuana market globally, has hit consumers with cumulative tax rates of 45% in some localities.

This includes cannabis excise tax, the local and states tax rates, and the entire tax imposed on flower and leaves. Consequently, these high tax rates make it rather impossible for legal cannabis to rival with prices in the black market.

Illegitimate producers do not wait for licensing; they do not pay sales or exercise tax and don’t owe any income tax to the federal state or government. In simple terms, the black market in several key U.S, states is thriving, an aspect that has slowed the push of consumers into legitimate channels.

Trade war tensions between China and the U.S. can be attributed to the poor performance of Cannabis. Although cannabis planted within a lawful U.S state cannot exist in that state, the components used in cannabis paraphernalia and the equipment growers use to cultivate is subjected to higher costs and tariffs.

KushCo Holdings has seen its earnings outlook decline substantially in the past three months. Issues with U.S. tax rates and packaging in Canada are undoubtedly playing their role. Additionally, one should not overlook the trade war, particularly with KushCo gaining most of its sales from vaporizers as opposed to packaging solutions.

KushCo lately announced its plan to pass higher costs to consumers with the aim of boosting its gross approximately 5% points in the third quarter. Nonetheless, it still has a long way to attain a respectable level with regard to its gross margin.

Trust is a major factor as depicted by blatant fraud, conflicts of interest at executive levels, and accounting woes. Over the past three months, CannTrust’s profit projections have been sliced by two-thirds.

An announcement by CannTrust of its growth of unlicensed cannabis in five rooms for six months resulted in a suspension in sales. In line with this, there is a possibility that Health Canada may come back with a modest punishment for CannTrust, for instance, a suspension of sales for a short period, loss of inventory or a fine.

Revoking CannTrust’s cultivation license will see earnings and sales decline. Evidently, investor trust in these stocks is a huge problem currently, and it has the potential to have an impact on operating results concretely. 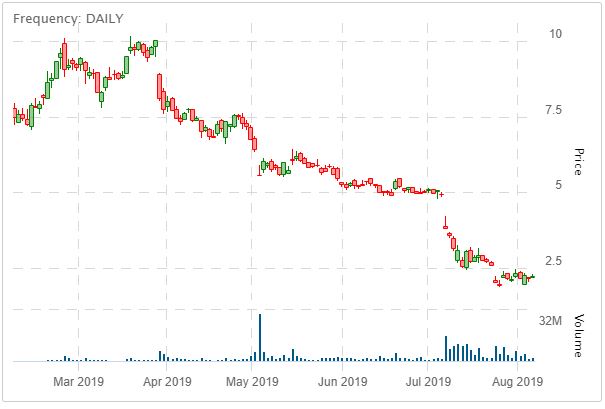 CannTrust hits the top of our list for worst performing marijuana stocks. As we mentioned above, they have been under heavy scrutiny from regulators are likely to see fines for illegally growing marijuana. This leaves a lot of unknowns for investors and is probably best to just leave this stock alone until more information becomes public.

Even though he is a shareholder of CTST, Sean Williams does not consider investing more money until there is “better clarity” on the firm’s outlook after it admitted its wrongdoings. In case you are not up-to-date with its operations, almost a month ago, the corporation stated its noncompliance actions. These involved growing marijuana in five unauthorized rooms from October 2018 to March 2019. After that, the rooms were certified in April.

To a large extent, the future of CannTrust is quite murky at this moment in time. On the other hand, it could become a top-five manufacturer in Canada (on the assumption that it is permitted to maintain its cultivation certificates.

According to analysts, the market is, at present, exhibiting how the stock’s decline by 22% will affect CannTrust. For instance, Canaccord Genuity decreased its target price for CTST from 14.5 to 12 CAD. Such estimates depict the vulnerability of an investor’s capital in the cannabis trade.

Caution: It is not known what kind of punishment that Health Canada will impose on CannTrust. 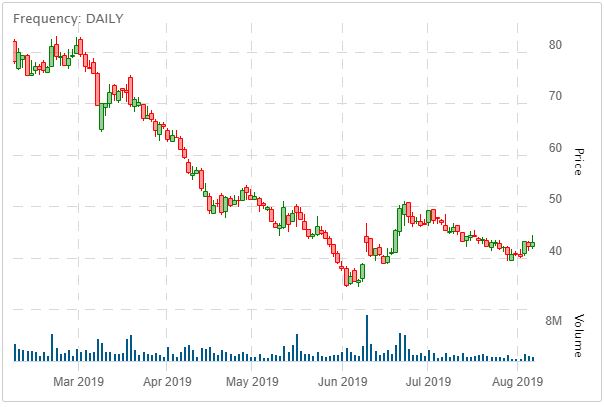 The first entire quarter of Canada’s recreational marijuana sales has encountered massive setbacks, and Tilray has been extremely affected than all other industry counterparts. Supporters of the stock have been encouraging themselves by relating Tilray’s unprofitability with Amazon at the onset of its operations.

Despite the fact that this comparison may appear notable, it does not hold any water. Without a shred of doubt, Amazon raised substantial equity to counterbalance huge operating losses at the start-up stage; however, the company’s operating expenses did not surpass top-line earnings.

A majority of the key stocks have witnessed upward gains of 40% this year. Nonetheless, TLRY stock has, in actual sense, lost 30%.

It can be projected that when Tilray stock reaches rock bottom, there will be a drastic turnaround for the firm. After its pioneering public offering, an enormous run ensued. Zealous investors were attracted to the risen in shares to $300. In spite of that, prolonged duration of continued losses occurred.

As soon as TLRY stock began trading approximately $40.00 per share (a significant from its initial three-figure rate), tables turned. 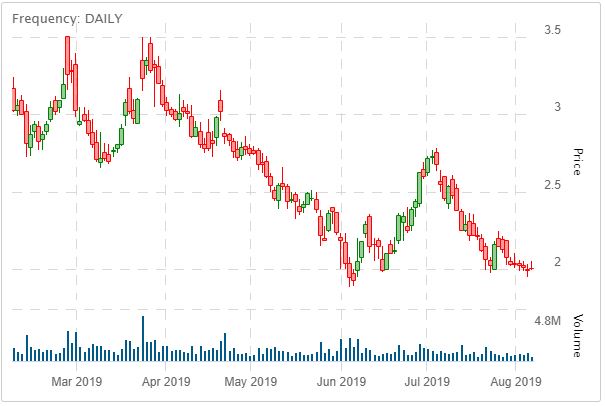 Even though MedMen strives to showcase itself as a lucrative company, it is not the case. The firm invests heavily on technology, corporate overhead, and marketing totaling to $65.7 million in the previous quarter.

These expenditures plunged actual operating losses to $61.8 million in only one quarter within a functional margin of negative 206.4%. The company’s lackluster performance has led to various controversies, including a lawsuit filed by the former CFO.

Moreover, MedMen was engulfed in issues regarding its promotional initiatives. Furthermore, the company’s operations worsened when reports emerged that it was deducting workers tips from their paychecks, at times resulting in negative pay.

Although the gross margins of MedMen are better as compared to Tilray’s, the firm still suffered a $64.4 million loss in the course of the fiscal second quarter. In the event the losses persist, the company’s stock price could reduce a lot further.

Besides that, the corporation’s rapid enlargement comes at a high cost. Therefore, aggressive spending has significantly diluted shareholders because a majority of these transactions were done using stock.

Caution: Although MedMen engages in expansion efforts, it does not provide investors with a full picture of what is yet to come.

The 5G revolution is underway so we decided to highlight our favorite stocks that are prime to profit from it. All you have to do is click the link below to signup and you’ll receive your FREE 5G report that breaks down 5 companies with big potential. SIGNUP